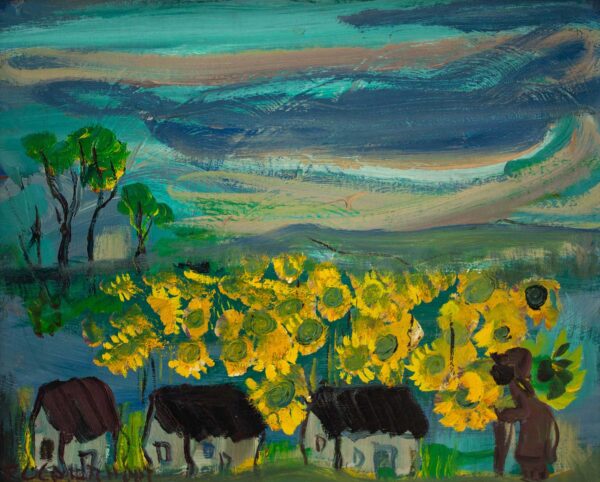 Sunflowers with Houses. Oil on board 45cm x 55cm. Framed.

Frans Claerhout was born in Pittem, West Flanders in 1919, and moved to South Africa as a missionary for the Catholic Church in 1946, at the age of 27. He stayed on a farm near Bloemfontein in the Free State province of South Africa. He worked as a priest and in his spare time he concentrated on his art.

He started painting more after relocating to Thaba Nchu in 1960, and became famous for his unique style, which used vivid colors and incorporated items such as donkeys, sunflowers and figures of people he met through his everyday life. Claerhout died of pneumonia at age 87 in 2006.

Examples of his work, characterised by their warm colours, thick impasto paint, exaggerated forms, humour and compassion were exhibited widely in South Africa, as well as in Belgium, Canada, Germany, the United States and the United Kingdom.

FREE DELIVERY IN SOUTH AFRICA ONLY

Any cookies that may not be particularly necessary for the website to function and is used specifically to collect user personal data via analytics, ads, other embedded contents are termed as non-necessary cookies. It is mandatory to procure user consent prior to running these cookies on your website.